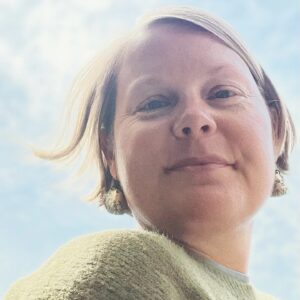 My name is Jessa Walters (she/her). I am an Evolutionary Astrologer and Trauma Center Trauma-Sensitive Yoga Facilitator (TCTSY-F).

Astrologically speaking, I have a 3rd house Cancerian Sun with a 12th house Aries Moon and Taurus Rising (with Venus in Gemini on the Ascendant). My Midheaven is in Aquarius with Asteroid Lilith in Aquarius in the 10th house. (you can read more about Asteroid Lilith below, if you wish!)

I have always had a hunger for learning, evolution and change. I studied psychology in undergrad and received an MA in Women’s Spirituality from the California Institute of Integral Studies (CIIS) in San Francisco in 2006, which is where I was first introduced to Evolutionary Astrology.

Around the time of my Saturn Return (age 30), just after graduate school, I moved to Daegu, South Korea, to live and teach at a university for three years, immersing in Korean culture and community, learning so much about so many things I never knew and finding my voice as a teacher.

I returned from South Korea to my birth place of Minnesota in 2011, where I became a Registered Yoga Teacher and began teaching yoga. I had been practicing yoga since 2000. It was through teaching yoga at the Domestic Abuse Project in Minneapolis, that I chose to deepen my yoga education and specialize in Trauma Center Trauma-Sensitive Yoga (TCTSY) through the Justice Resource Institute in Boston with David Emerson, founder of TCTSY.

This education and practice has influenced all aspects of my life, including my approach to astrology and how I work with people. At the heart of TCTSY is the centering of each individual’s agency and right to choose for themselves. So, in the exploration of each person’s birth chart, centering the free will/choice of each individual to relate with the possibilities and take action in the ways that feel aligned with their own knowing is the vantage point I’m coming from and the space I seek to hold.

In addition to my astrological study with Steven Forrest in his 3-year apprenticeship program, the following astrologers (to name a few) have and continue to inspire and enrich my astrological perspective:

**I work deeply with Asteroid Lilith as a function/drive, within one’s birth chart/psyche, of confronting, resisting, uprooting and ultimately eradicating patriarchy. Feminist and cultural critic, bell hooks, names patriarchy as not only male domination but a more complex interlocking of oppressive systems of power that work together in their functioning: “Imperialist, White Supremacist, Capitalist, Hetero-Patriarchy.”

–Melanie Reinhart – Chiron as portal to ancestral connection and healing

If you wish, you may view a full list of my credentials along with acknowledgements of my teachers and mentors here.

I am currently located, with my partner Daniel Gaustad, SEP, on the unceded, occupied ancestral homeland of the Ramaytush Ohlone Peoples who are the original inhabitants of the San Francisco Peninsula (Montara, California – 25 minutes south of San Francisco).